Recently, we were asked to come in as guests on Nihal’s show on BBC Asian Network. Our brief was that we would be discussing our work, as well as the menstrual taboo in the Asian community. We did a lot of research into the area, and I shared some of my personal stories with Sophie. We had a great time on the show and it was brilliant to promote the cause on such a large platform, but we didn’t really get a chance to share our thoughts on the ‘Asian side’.

What is clear is that the menstrual taboo exists, whatever community you are from. I have noticed that when in public, the majority of women will hide a tampon or sanitary towel in their pocket or up their sleeve before going to the toilet. Some women may even feel awkward going to a male cashier when they’re buying their sanitary products.

I have been guilty of all of the above at points in my life. But why do we do this? On average, a woman menstruates for 3000 days during her lifetime. Why are we so inherently ashamed of something so universal and natural?

When discussing this in the context of the Asian community, the taboo is stronger.

I was raised in a moderate, Pakistani Muslim household in Hertfordshire. I did not get the impression that menstruation was a taboo subject in my family, but I was kept out of sex education classes in year 6 and year 9 and was only told about periods when I asked my mother outright what they were. It became clear to me that it was simply not a subject that was to be discussed in front of my father or brother. After a while I realised this was ridiculous; my father is a GP and my brother would eventually have to learn to deal with ‘women’s issues’. Once I had started A Bloody Good Cause, the topic of menstruation was out on the table for everyone to see. Eventually I realised that those who were most awkward about this subject were Asian women, which only emphasises the attitude of shame that has become normal in certain generations.

However, I realise that from the point of view of an Asian woman living in the UK, my experience with the menstrual taboo has been incredibly mild. I have learnt about the isolation that is suffered by women in the Asian subcontinent, who are almost treated as untouchables. I have also heard stories from my close friends of Asian women not being able to enter the homes of certain family members for the first few days of their period.

After researching into this area, I think I have narrowed the issue down to the following areas:

In Hinduism, menstruating women are permitted to enter the temple or take part in religious rituals. As Hinduism is such a varied and old religion, different interpretations and practices seem to apply in different communities. In some circles, it is common to isolate women by asking them to eat and sleep in separate rooms while they are menstruating. I asked a Hindu friend about the rules behind these customs and her understanding was that periods were considered dirty and/or unholy by some people. 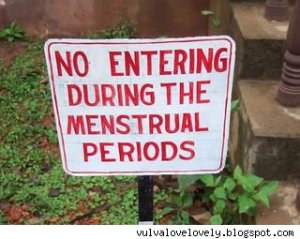 In Islam, you are not permitted to pray, fast or read the Quran while you are on your period. While I initially found this to be unfair, it is in line with the notion of cleanliness that is practiced by Muslims. Before praying Muslim men and women have to perform the ‘wudu’ which ritually purifies their bodies. The wudu can be broken by passing urine or faeces, passing gas, falling into a deep sleep or sexual intercourse. In the same sense, the flow of blood also negates the cleanliness required for prayer.  Women are still permitted to enter the mosque and take part in religious festivals while menstruating.

While the reasoning for these rules may exist, with any religious preaching there is room for interpretation and therefore the capacity for misinterpretation. The preaching of the ill-informed is enough to start any taboo! Questions can also be raised as to whether religion dictated these rules first, or whether they were encouraged by the society of the time.

Getting your first period is your first step into womanhood. Like it or not, periods are intrinsically linked to sexuality as they allow a woman the ability to start reproducing.

Reproduction, like menstruation, seems to be on the taboo list too. I remember saying the word ‘pregnant’ once on a trip to Pakistan, only to be hushed by the nearest woman for fear of being overheard. I remember feeling outraged that she had tried to stop me from talking about pregnancy. How did this woman think she had arrived in the world and why was it something to be ashamed of?

In general, there are engrained attitudes in the Asian subcontinent in relation to the effect of periods on the rest of society. In parts of India, women are prohibited from entering kitchens when they are menstruating for fear that they will contaminate the food. In some parts of Bangladesh it is believed that cloths used to absorb the flow of menstruation attract evil spirits, and so they should be burnt or buried.

These attitudes obviously hold no basis in reality, and the only way that they can be combatted is through education. While researching this area, Sophie and I came across an episode of Ted Talks (https://www.youtube.com/watch?v=bpROqmb5I8k). Aditi Gupta and Tuhin Paul met at university and fell in love. When Tuhin found out the struggles Aditi had faced while menstruating he was shocked, and together they decided to do something about it. Through a lot of hard work and perseverance, battling through taboo and stigma, they have created the website Menstrupedia (http://www.menstrupedia.com/).

As part of Menstrupedia, they have also created a comic book which informs girls about periods from the perspective of four females. This has grown to become an extremely powerful educational tool, not only helping to battle stigma but also in order to teach on the health aspects. According to statistics, only 12% of women in India actually use sanitary products. The stigma has caused products to be hard to find and expensive. The majority of women use rags, and in more rural areas, even things like sand, leaves or sawdust.

Aditi and Tuhin are now my heroes. As hard as Sophie & I have worked on A Bloody Good Cause, it pales in comparison to the effort it must take to spread awareness about this issue in a country where even buying a packet of sanitary towels is often a challenge.

These issues will have found themselves in the UK through the south Asian diaspora. Of course I’m not suggesting that this level of stigma exists in every family or even every town. Nor am I suggesting that this is a problem unique to the Asian community. It’s probably not even the biggest problem in the Asian community! My concern remains to be how we can battle the stigma of being an immigrant community, when we struggle to offer the women in this community equal respect. 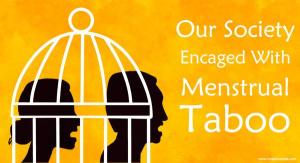 The Government currently provides condoms and razors to homeless shelters for men, but does not provide sanitary products for women. How can the UK as a whole fight for the death of the gender pay gap and an end to sex discrimination in the workplace, when we can’t even seem to treat the vulnerable members of our society as equals?

Sophie and I want to start a revolution we are calling “The Red Wave”. There is nothing bold (or communist) about this revolution. All we want is for women to go through their periods without shame. So next time you’re going to the bathroom, try to hold your sanitary product in your hand as if it was your mobile! Don’t cover it up and don’t be ashamed.  The more we encourage openness and conversation on this topic, the faster we will find ourselves coming towards a happy resolution.

If you have any thoughts on this subject or have any experiences to share, feel free to comment below or send us a personal message via our Facebook page (https://www.facebook.com/bloodygoodcause).