On holiday in Northumberland this year, I betrayed my beloved paperbacks and gave in to my mother’s constant demands that I read a book on her Kindle. I’m glad I did, as the book I read was I Am Malala: The Girl Who Stood Up for Education and Was Shot by the Taliban, an autobiography of sorts written by the eponymous Malala Yousafzai alongside Sunday Times Foreign Correspondent, Christina Lamb. I read it in one greedy sitting in the wee small hours, and if you choose to read it after reading this post, I’m sure you’ll do the same. 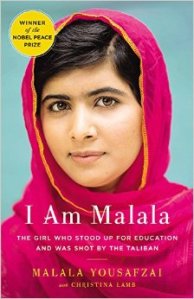 I am perhaps a little late to the party, as Malala has become a well-deserved familiar face in the past three years. Nonetheless, I was so inspired by the book that I wanted to take the opportunity to write about why, for me, she is a shining example of modern feminism.

A bit of background first. Malala Yousafzai is now 18 years old and lives in the West Midlands of England. She was born in Pakistan’s Swat Valley – a region of beautiful verdure and ancient connections with Hinayana Buddhism. The Swat Valley is located close to Pakistan’s border with Afghanistan, and takes its name from the Swat River that runs through its mountain passes. Religiously, the Swat Valley has been predominantely Muslim since the eleventh century, and ethnically, the area is mostly populated by Pashtun, Gujjar and Kohistani communities, Malala’s family being the former. The Pashtuns are a people spread across Afghanistan and Pakistan, and like Malala and her family, usually follow Sunni Islam. 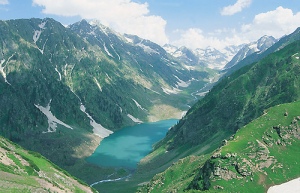 From 1996, the Taliban were the ruling power in neighbouring Afghanistan. With their strict interpretation of Sharia Law, the Taliban kill those who oppose them. Women and girls, in the eyes of the Taliban, are second-class citizens. By 2002, the Tehrik-i-Taliban Pakistan (TTP), or Taliban Movement of Pakistan, was starting to grow in the Swat Valley. A hardline religious leader and radio broadcaster, Mullah Fazlullah, began to gain listeners and power over the waves in 2004. As Fazlullah became more and more vocal, his views became more and more vehement. He decried the shamefulness of all things Western and exhorted his listeners to eschew them. His policies towards women became stronger and nastier, broadcasting that women did not belong in schools, that they should not leave their house without their husbands, and that they should wear a full-body-and-face burqa rather than the Arab-style “slit” burqa.

Malala’s father, Ziauddin Yousafzai, now a United Nations Special Advisor on Global Education, set up and taught at a chain of school across his home region, the Khushal Public Schools, his two sons attending the boys’ school and Malala attending the school for girls. From an early age, Malala was shown that women had a right to education, and, as an enthusiastic learner and a competitive student, she lapped up all that school could offer her. As TTP opposition to school grew, Malala found ways to defy them. Many girls’ schools were blown up by the Taliban during this period, and yet Malala continued her school attendance in secret along with several other brave girls and their teachers, hiding textbooks under her clothes; her father, too, was unafraid by Taliban threats, resisting the closure of his schools for a long time, until it became apparent that the TTP were prepared to silence him in the most violent of ways, and make a public example of his disobedience. In January 2009, the Taliban enforced the cessation of girls’ education across the Swat Valley.

Malala became a vocal defender of a girl’s right to an education as early as eleven years old, when she spoke out against Taliban restrictions at a local press club in Peshawar with her father. Between January and March, she became an anonymous blogger for the BBC Urdu news site, recording her experiences as a young Swat schoolgirl under the Taliban in diary-like entries, during a period of the closure and re-opening of schools. Continuing to vocally support girls’ education throughout her teenage years, Malala appeared in a documentary called Class Dismissed about life in the Swat for the New York Times, amongst countless other news pieces for the international press. In October 2011, the social rights activist and former archbishop Desmond Tutu nominated Malala for an international children’s peace prize. This was shortly followed two months later by the Pakistani government awarding Malala their first National Peace Prize.

We all know the next part of the story. On catching the school bus home one day in October 2012, two masked Taliban gunmen boarded the bus, demanding to know which girl was Malala, before shooting her once, point blank in the head. Incredibly, the bullet went through her head, damaging the left portion of her brain, and carried on through her neck before lodging in her shoulder. She was first treated in Peshawar before being airlifted to the Queen Elizabeth Hospital in Birmingham for specialist treatment, eventually coming out of her coma over a week later. She and her family now live in Birmingham and Malala attends a local girls’ school, where she recently achieved a string of A and A* GCSE results. 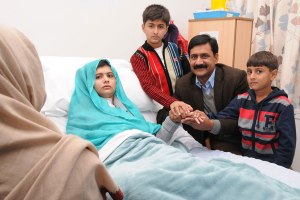 Malala in hospital with her family

An incredibly courageous and inspirational feminist before the shooting, since the incident, Malala has become a household name and continues to speak out against injustice as she strives to make the world a better place. She has used her new-found fame to deliver rousing speeches on the topic of girls’ education, one of the most famous being before the UN in 2013. Her birthday, July 13th, has become international “Malala Day”, a day which, she says, is,

“not my day. Today is the day of every woman, every boy and every girl who have raised their voice for their rights.”

In late 2013, the Malala Fund was set up by UNESCO and Malala and Ziauddin Yousafzai. Under the “What We Do” section of their website, they write:

“Our goal is to enable girls to complete 12 years of safe, quality education so that they can achieve their potential and be positive change-makers in their families and communities. We work with partners all over the world helping to empower girls and amplify their voices; we invest in local education leaders and programmes; and we advocate for more resources for education and safe schools for every child.”

Celebrities and politicians have spoken out about the importance and bravery of her work, and, last year, at the age of 17, Malala became the youngest ever person to win a Nobel Peace Prize. Earlier this year, in response to the Syrian refugee crisis that has swept the Middle East and Europe, Malala opened a school near the Lebanese border with Syria, for girls aged 14 to 18. Now, her message will reach an even wider audience as a film about her life and campaigns, He Named Me Malala, hits cinema screens in the USA this October. (Click here for the trailer.)

One child, one teacher, one book and one pen can change the world

To me, Malala is a feminist idol for several reasons. Firstly, she is not afraid to stand up for what she believes in, to call out what she sees as injustice, to spur others to fight alongside her through reasoned argument and impassioned campaigning, and never with violence. She believes, as I believe, that “education is the only solution”. Secondly, she does it all in a vaguely cheeky and endearing manner, and doesn’t expect anyone to do it for her: she is fiercely independent and unafraid of the challenges she might face. And thirdly, she repeatedly speaks of the rights for both boys and girls. Whilst girls’ education was at the root of her argument, because of the global disparity of its provision and the threat of extinction it faced under the TTP in the Swat Valley, she cries out for all children to have access to education, regardless of ethnicity, gender, class or religion. “I am here,” she said in her address to the UN, “to speak up for the right of every child.” So often, feminism is dismissed as “man-hating”, when all it is is a desire for equality between the genders (as Sanya writes in her previous blog post, My Journey into Feminism). Malala shows on a global stage that equality and courage lie at the heart of feminism.