As you may have noticed from our Facebook page, we’re very upset about the fact that it’s 2015 and the Government are still trying to tax our periods.

When Sophie and I started ‘A Bloody Good Cause’, we used the 5% tax on sanitary products as an example of the fact that we are still very much living in a man’s world. The ‘Stop Taxing Our Periods’ petition has been circulating the internet for a while, now having over 250,000 signatures and growing by the day. If you haven’t already signed the petition then you can do so here.

To put things in a bit of context, the tax on sanitary products means that tampons and sanitary towels are treated as ‘luxury items’ by the Government. This tax is not applied to items such as exotic animal meats, men’s razors or Jaffa Cakes.

In August 2015, Sophie and I contacted our local MP Stephen McPartland, and asked him what he thought about the tax. His response was the following:

“I do appreciate this is an important issue. However, I understand the UK Government has no power in reducing the current VAT rate charged on women’s sanitary products. This is because VAT law is governed by the EU, with EU legislation determining a very specific set of products which may be zero-rated, and have no VAT. The EU does not allow the UK, or any other member state, to extend unilaterally the scope of existing zero rates or to introduce new ones. Let me assure you that the Prime Minister is truly frustrated with the difficulty of removing sanitary taxation entirely. However, I am pleased that the 5 per cent VAT rate is the lowest rate currently allowed under EU law.” 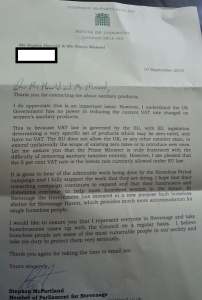 The letter we received from Stephen McPartland

This was a disappointing response to say the least, and frankly smacked of the kind of recycled, watery Government spiel designed to appease a constituent. On the other hand, at least he (or more likely his assistant) took the time to respond.

However this week, news sprang up suggesting that we may be about to lose the tax for good. Towards the start of the debate it was said that a number of MPs had signed up to Paula Sherriff’s amendment to the Finance Bill. If this amendment were to be passed, George Osborne would be forced to negotiate with the EU regarding a VAT exemption on sanitary products.

Unfortunately, despite the initial excitement the amendment was rejected by 305 to 287 votes. The Financial Secretary to the Treasury, David Gauke, said that while the Government “sympathised” they were not able to change the stance on VAT under EU Law. However, Mr Gauke did concede that “This debate illustrates there is very considerable cross-party support for the UK to abolish VAT on sanitary products.To that end… I will raise this issue with the European Commission and other member states setting out our views that it should be possible for member states to apply a zero-rate to sanitary products.”

The amount of news exposure obviously reminded me of the response we had received from Stephen McPartland over the summer. The situation became even more unsettling when a list of all of the MPs who had voted against cutting the ‘tampon tax’ had been published, and Stephen McPartland’s name had appeared on this list. Clearly, this isn’t as important or frustrating of an issue to him as he tried to lead us to believe.

It has taken considerable control for me to write this blog post calmly. When I saw my local MP’s name on the list of those who had voted against cutting the tax, I wanted blood. Not his blood however; I want the blood of my fellow women. The blood we shed once a month in painful, bloated misery. The reason society is able to live in blissful ignorance while 50% of us lose the lining of our uterus every month, is because we have sanitary products to make things more discrete. If they’re truly taxing our pads and tampons as luxury items, that implies that we could go without these products. Is that what the Government is after? 28.5 million women bleeding through their knickers every month? I think not. 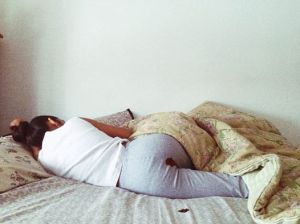 People may try and argue that £4 a month isn’t enough money to cause a fuss about. Don’t get me wrong, I can afford sanitary products at their current rate and I can get through my period fairly comfortably as a result. What I’m not comfortable with is the fact that the Government treats a biological factor as something luxurious. I want to quote a point my friend Georgina Crane made to me earlier today, “there are some incredibly bigger things to get stressed about but I don’t believe that that’s a reason for us to not be concerned about this. This is massive; this is representative of the total inequality and the archaic views of men”.

The reason that so many people are riled up about this issue is because it has come down to a male dominated Parliament to decide what is best for women. This is part of same system that does not provide homeless shelters with the same funding for sanitary products, as they do for condoms and razors. Periods are biological. They are not a choice and they are most definitely not a luxury.

Finally, as Sophie said in her blog post on this issue, we urge you to contact your local MP and raise this issue with him or her. (You can find contact details for your local MP here.) You can also find your local MEP (Member of European Parliament) here and raise it with them too!

One thought on “End this bloody tax!”