Welcome to our new six part series, “Ask the Audience”, where we interview ladies from different age groups, backgrounds, professions and locations on a series of topics affecting women.

The news seems to be full of stories of how controversial it is for women to use Mother Nature’s milk supply to feed their babies in public. Yes, it’s the 21st Century and apparently if you’re getting your boobs out for anything other than Game of Thrones, it’s considered offensive.

I think you’ve probably gathered my opinion on the subject, now let’s hear from the audience.

Having recently given birth and breastfed my son I feel it is completely fine to breastfeed in public as it can be done discreetly. When I was feeding I would choose to sit with my back to other people (e.g. in a cafe) and I would wear a breastfeeding top so very little of my breast was exposed and I would use a muslin to cover my son. At the end of the day it is the most natural thing in the world and if a baby needs feeding then it needs to be done. I’m sure people would frown and make a comment if a mother left a screaming baby purely because she didn’t want to feed them in public.

The discomfort regarding public breastfeeding is a consequence of the oversexualisation of women’s bodies in my opinion. Breastfeeding is the primary function of breasts after all, so there really should be no issue! Despite this, I would never breastfeed in public for fear of what people might think. It is sad to me that I associate shame with my body but this has been programmed into me from a very young age, which is the way many young women are raised, unfortunately.

It’s perfectly fine for a woman to breastfeed in public so long as she has covered herself properly. Because both religiously and culturally we believe that both men and women have body parts that are part of their ‘awrah’ and must be kept private. Hence, it would be inconsiderate of a woman who chooses to expose herself while doing so. I personally feel the issue is not about feeding your child, rather it’s about the public display of your private parts that needs to be deemed undesirable no matter what culture one may belong to.

It is perfectly fine but I would not [agree] with someone openly exposing their breast almost exploiting the situation, when we live in a time where there are products available to cover yourself and express milk before going out.

In sexually liberated countries, I’m totally pro. I don’t really understand what makes breastfeeding disgusting, indecent or sexual. However, in sexually orthodox countries or communities, public breastfeeding can pose a threat to women and attitudes need to catch up before women can do this freely.

That’s the natural way babies eat, so I don’t see why we should be surprised or reject it. Many people are not disturbed at seeing people begging or behaving improperly, but they look to the other side when they see this natural (not sexual) act.

I think breastfeeding is the most natural and beautiful gift a mother could give her child. I admit that I can understand why it may make someone uncomfortable to see a woman breastfeeding in public but, again, this relates back to the way women are portrayed in the media. Breasts are seen as something sexual when, in reality, they are there for a mother to nurture her child. I can’t think of anything more feminine and I wish people weren’t so taken aback by it. It’s only a grown adult that would find it uncomfortable because of the sexual connotations that are attached to a woman’s body. A child would think nothing of it.

Personally, I wouldn’t do it – even if it was an inconvenience to do so I would probably do my best to find a quiet room somewhere private. However, I realise that this is my choice, and I feel that all women should be able to make this choice freely, without fear of the judgment of prudes, if we need to breastfeed in public. Why are people only disgusted when they see boobs being used for the purpose they were designed for, and not, for example, by the cornucopia of nudity in Game of Thrones? It’s like getting annoyed at an umbrella that keeps the rain off you.

The general consensus from our contributors seems to be that if a baby is hungry, there should be no issue in a mother breastfeeding in public as she can easily do so without exposing herself. And if she does happen  to expose herself that should be ok too! Chances are she’s just struggling with a hungry little baby, not trying to offend/excite anyone with “indecent” exposure. These boobs were made for milking and that’s just what they’ll do.

So, what are your thoughts? Do you think women should be able to breastfeed where they like or would you be more comfortable if they did it in private? 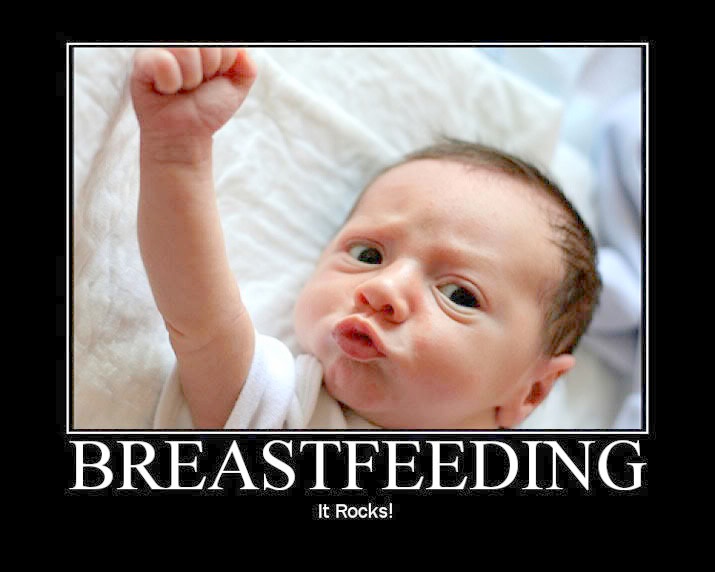 Mummy Mummy look at me

Tune in next week for the next instalment of Ask the Audience!