[Recently, I was sent a link to this article, an opinion piece by Marta Güelfo Márquez in the webzine La Réplica. I found it such an interesting read that I contacted Marta, a psychologist, sign-language interpreter, social activist and feminist, and asked for permission to translate the piece from the original Spanish into English for the readers of our blog. Additions in square brackets have been made by me, Sophie, in order to illuminate some points for the English-language reader.

Machista (adj.) is a Spanish word that describes someone who is sexist and chauvinistic, whose worldview is one of machismo (n.); someone who actively opposes feminism. Perhaps the closest we have to this is English is anti-feminist or the newly-arisen menimist.] 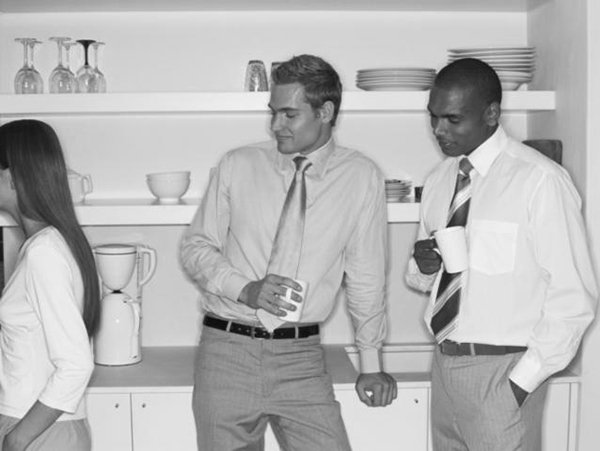 Sometimes it can be tiring viewing everything through the lens of gender. When you come into contact with feminism, when it becomes an essential part of your life, when it mixes with your identity and your personality, there’s rarely any way back.

This lens allows you not only to see, but to observe, to analyse, to discover, to question, to point out, and, above all, to explain. In applying this lens, you unearth answers to many situations that go by unexplained – positions of power, stereotypes, beauty standards, public space, gender violence, the wage gap and so on – which beg to be probed and analysed from a gender perspective.

When we use this lens to look at the “bigger picture”, it’s easier for people to get onboard, given that inequality becomes more evident and (apparently) less intrusive in our everyday life when viewed as a universal phenomenon. We recognise and accept that it’s true that we don’t have female presidents, that there is a specific type of violence directed towards women, or that it is often mothers who are left to deal with child-rearing and household-management. But, what happens when we use this lens to look at the “smaller picture”, to examine our close and tangible reality? When we question and point out the sexism that affects us day in day out, that’s nearby, that has become part of our normal lives? Here, we encounter the neo-machista. 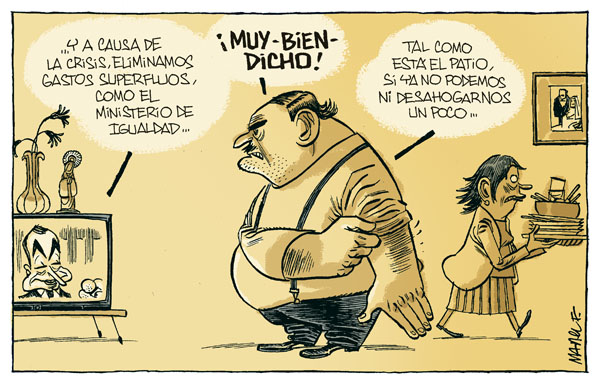 The TV politican says: “And due to the economic crisis, we are getting rid of unnecessary spending, like that of the Ministry of Equality.” The brutish-looking man of the house says: “Well said! The world’s gone mad when we can’t even let that go!”

Today, it’s not easy to openly declare oneself a machista, since the word connotes undesirable and outdated values. (And this is no coincidence, but the fruit of the fight of many women over the centuries.) Thus, we see machismo appearing in new ways: it becomes less obvious and tries to become more and more subtle, but its objective continues to be to protect and maintain the privileges of the patriarchy.

It’s not easy dealing with the neo-machista daily. It is, of course, as with many other struggles, preferable to reach a harmonious equilibrium via a calm, patient, intelligent, and, yes, humorous dialogue. Nevertheless, it can also be handy to have at your disposal a list of the neo-machista’s standard responses, so that you can detect such a person with ease and respond appropriately.

Some lines to listen out for:

This is an error that frequently crops up from a lack of understanding. Feminism is a movement that defends equal human rights for men and women. Machismo is made up of certain attitudes, behaviours and beliefs that men are superior to women.

The term “gender violence” doesn’t connote violence committed by women towards men, because our culture isn’t built on an ideological system that oppresses men as a gender, only women. “Gender violence” connotes masculine violence towards a partner or ex-partner and has its roots in the patriarchy, in androcentrism, in ideas of male possession of women, and in traditional ideas of romantic love. All of which have led to a social phenomenon in all cultures, and which, in Spain, leads to 50, 60 or 70 women murdered every year by their partners or ex-partners. Such a dire situation calls for a serious response from the political, social and educational spheres. [In England and Wales this figure is, sadly, even higher, with over 100 women killed by their partners last year.] 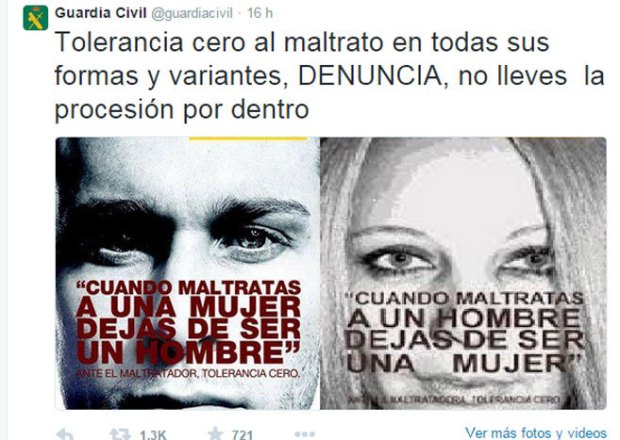 A tweet from the Spanish national police force last year that incensed some Twitter users for its conflation of masculine and feminine domestic violence. The tweet reads “Zero tolerance against domestic violence in all its forms – REPORT IT, don’t put on a brave face”, and the posters read “When you abuse a woman, you stop being a man” and “When you abuse a man, you stop being a woman”

According to the Fiscalía General de Estado [the Spanish equivalent of the Crown Prosecution Service], the percentage of fabricated reports concerning gender violence stands at 0.018%. A figure that speaks for itself.

Such a thing doesn’t exist. The word feminazi has been invented by neo-machistas to demonise and ridicule the feminist movement. This word has been used even by neo-machistas as well-known as Arturo Pérez-Reverte in order to attack feminism. [Pérez-Reverte is a Spanish writer and broadcaster who has won several awards over the past 30 years.] 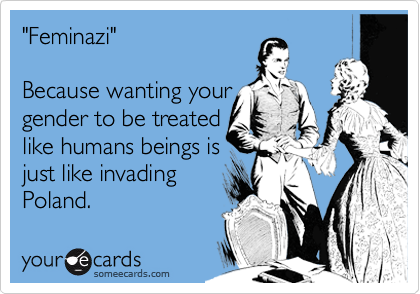 [This one doesn’t work on a grammatical level in English, as we don’t have gendered nouns as in Spanish. Nevertheless, a recent Guardian article suggested that there is an inherent sexism in the English language too. In her example, the author suggests the neo-machista will mock the feminist’s views on a non-gendered language by saying they’ll have to repeat every noun twice (here, the neo-machista chooses the word silla, which means “chair”), once with a masculine article/ending (sillo), once with a feminine article/ending (silla), in order to avoid offending anyone.]

Language is important in as much as we use it to build and represent our thoughts. That which doesn’t have a name, we don’t see, and that which we don’t see, doesn’t exist. Our language has come to be via our societal and cultural values, which, historically, have been patriarchal and androcentric, and it is for this reason that we must question it. To simultaneously use the masculine and feminine of whatever noun is an attempt to mock non-sexist language, which is ridiculous given that it’s just not necessary to differentiate gender in those nouns that don’t have a biological sex [like “chair”].

Yes, there are days when we get up and we’re itching to fight for our rights, in whatever area of our lives – including in those situations in which the idea that inequality exists isn’t an easy pill to swallow. 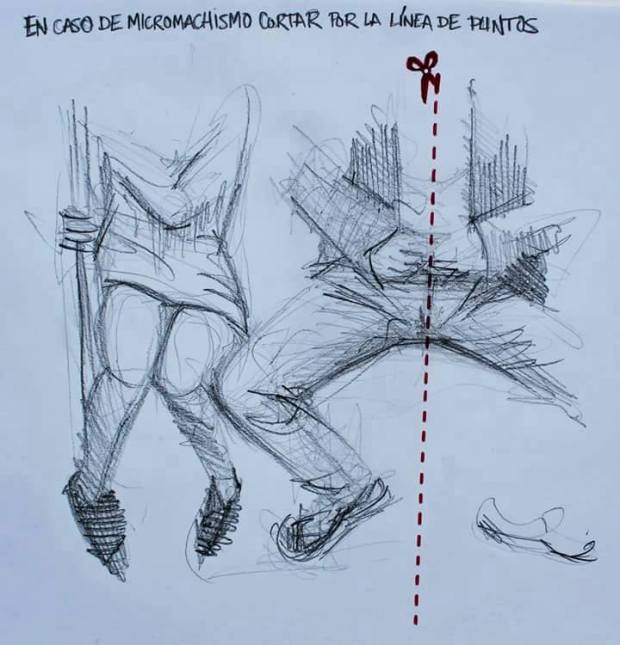 Drawing by Javitxuela. The caption reads “In case of everyday sexism, cut on the dotted line.”

A compliment is something pleasant that you say to someone you know, to their face, with respect, and with the intention of pleasing that person. Whistling to or shouting at a woman you don’t know, on the street, regarding her face, body or clothes is verbal harassment.

This argument has been repeated so many times in political and social organisations when talking about equality in positions of responsibility. Because of education, social mores, stereotypes and a lack of examples, it’s often the case that leading figures, political leaders and company bosses often end up being male. Tools for aiding equality, such as quotas, promote equal representation.

March 8th was declared International Woman’s Day by the UN in 1975 to commemorate the fights of working women who fought for their rights and for equality in their society. Even now we live in a society that oppresses women and in which inequality in multiple spheres – work, economy, politics, family – continues to be evident, which is why we keep struggling forward, every day, and especially on March 8th.

Believing that women are already treated equally in all spheres is a common error. Political underrepresentation, the wage gap, those women murdered by their partners, the glass ceiling and domestic disparity all suggest the opposite: we live in an unequal society.

It is when we start to analyse gender inequality close-up in this way that the neo-machista feels threatened, gets scared and makes these sorts of defensive comments.

And it’s because of this that feminism irks them; as Nuria Varela [a Spanish journalist and feminist, who helped bring about the creation of the Ministerio de Igualdad, or Ministery of Equality, in 2008)] says, it’s because of this [verbosity] that feminism is seen a busybody questioning the established order of things. But it’s exactly that – the pointing out, the questioning, the permission to explain even the most subtle forms of oppression, – that makes feminism non-negotiable as we move towards a more equal society. It’s for this reason that feminism is necessary, because it makes us grow; it is necessary in order to be happy.