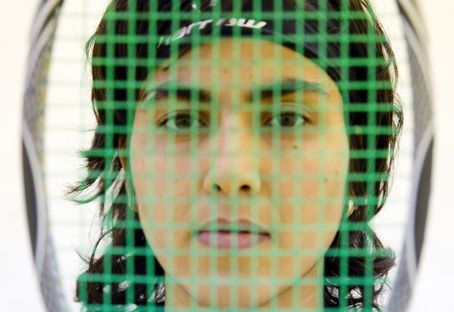 As you may have heard, I recently attended the Women of the World Festival in London. This festival encourages celebration and discussion around gender equality and hosts many famous faces who come to share their stories. One of the talks I attended was called ‘Women in Sport’ and featured a panel of female sportswomen and journalists. One of these ladies was Maria Toorpakai.

I remember hearing about Maria’s sensational story a couple of years ago, when it emerged that in order to play squash she had had to disguise herself as a boy. This was one of those stories that had gone viral and circulated Facebook for a couple of days, before being forgotten again (at least by me). By seeing Maria in the flesh however, I was struck by just how far she had come in her life and how inspirational she was despite her young age and slight language barrier.

Maria was born and raised in Waziristan, one of the tribal regions in North Pakistan which remains under the oppressive rule of the Taliban. As you can imagine, this was not a particularly supportive environment for a young girl with potential and dreams to grow up in, but despite this massive barrier, she has gone on to become Pakistan’s  #1 female squash player.

Maria was born in 1990, as the daughter of one of the tribal leaders of the region, Shamsul Qayum Wazir. Despite the fact that he was from one of the major political families of this intensely conservative area, he believed strongly in gender equality. His belief and passion for equal rights caused many to think he was mentally ill and he was all but disowned by his family. He married Yasrab Nayum, a girl from a rival political family. Yasrab had received no education like many of the girls in the region, and so Shamsul encouraged her to make her own choices with both her burqa and her passion for learning. This is something he also encouraged in his two daughters.

When Maria was 4 years old, she shaved her head and threw all of her ‘girly’ clothes in the fire. Rather than chastise or judge her, her father laughed and dubbed her Chingaiz Khan (Genghis Khan).

In her youth, Maria had an aggressive personality and was always getting into fights – “My hands, elbows, knees were always bleeding – my eyebrows and face were always swollen.” Her introduction into the world of sport calmed her aggression and gave her drive and focus. However, the strict rule of the Taliban meant that girls were very limited in what they could do. As Maria pointed out in her speech at WOW, women are rarely taken to hospital when they are ill or sent to school to be educated, so the idea of her competing in sport seemed impossible.

At the age of 12, Maria (under the encouragement of her father) disguised herself as a boy and renamed herself Chingaiz Khan. When the host of the panel asked how no one had ever noticed that she was not a boy, she said “just look at my photos”.

In her early years, she competed in junior weightlifting championships and was ranked as Pakistan’s #2 in this category. However, when she showed an interest in squash (one of the biggest sports in Pakistan) she trained and competed as a boy without notice until the age of 16, when she was asked to provide a birth certificate.

At this point, she could no longer hide her gender and was subjected to bullying and harassment from her fellow players and many around her. Despite her poor financial circumstances and the scorn she faced from her community, she continued to train, locking herself in squash courts for 10 hours a day until her hands bled and later training at home.

Her training paid off and her success and fame grew. She turned pro in 2006 and became Pakistan’s #1 squash player, winning awards such as the Salaam Pakistan Award. Unfortunately with this fame came attention from the wrong places. The Taliban believed that what Maria was doing was un-Islamic and her family started to receive a number of threats.

Although the Pakistani Government tried to implement safety measures for her and her family, eventually Maria became tired of the constant threat and she decided to move abroad. “A [modern] squash court has so much glass in it, so if there was a bomb blast inside, it would kill so many innocent people.”

For the next three years she wrote to international clubs, trainers and schools but she received no positive response, until she came across the retired former world #1, Jonathon Power.The first squash racket she had ever been given had been emblazoned with his name, and so it was like destiny when he asked her to come to Canada to train with him.

Maria now lives and trains in Toronto and is ranked as the 49th best female squash player in the world. While on the panel at WOW, Maria said that if it had not been for sports she would not have such positive energy within her today. She is now respected for her confidence and independence, and it gave her the determination to never give up.

“The more you connect with the world, the more you learn about humanity. The Prophet Mohammed (PBUH) said ‘seek knowledge even if you have to go as far as China’… I now have Jewish friends, Hindu friends… [I’ve learnt that] faith doesn’t separate us, it connects us.”

I felt really inspired and honoured to see Maria speak, because she not only embodies the incredible strength and determination of women, but she reminded me that in order to inspire the next generation we have to start with the way we raise our children. I have no doubt that Maria was always destined for greatness, but her journey was a little more comfortable with the support of both of her parents.

Maria’s sister, Ayesha, has also flourished under this support system as a political activist and is currently a member of the National Assembly of Pakistan.

So if Maria can come from one of the most dangerous areas on the planet to be a woman, live under Taliban regime and still manage to fight through barriers and become one of the best sportswomen in the world, then surely that means we can do anything.