France has had its fair share of issues lately. It seems to have become a big target in the West for extremist violence, with what feels like a  horrifying new incident every few weeks.

We could talk all day about how to battle these issues, but with the news of the recent ‘burkini ban’, it seems as though some towns in France are using the prohibition of modest swimwear to reinforce their secular values.

The burkini is a type of modest swimsuit, which allows women to enjoy the beach or the pool, without exposing much of their bodies. It usually comes in the form of a pair of leggings, a full sleeved tunic and a hood resembling the hijab.  It was invented by an Australian woman called Aheda Zanetti, who wanted to ensure that Muslim women felt as able to participate in certain activities as anyone else. Aheda herself points out that the burkini was not only made with Muslim women in mind; many different religions and cultures promote ‘modest’ dressing, and as Nigella Lawson showed everyone in 2011, it could really be worn by anyone who wants to cover up on the beach.

As a Muslim woman myself, I don’t feel comfortable exposing too much flesh. There have been many occasions on which I have chosen to wear leggings or a maxi skirt on the beach and on one occasion I even decided to swim in the sea fully clothed! The burkini is not something I would see myself wearing, but I wouldn’t wear a bikini either. While I know that all Muslim women are different and have their own values, this is my choice.

So why have certain towns in France banned the burkini? As you may know, France have quite a history of banning overt symbols of religion, such as the niqaab (the full face veil that some Muslim women wear).

Cannes was the first town to ban the burkini and they gave the following reasoning for doing so, “[they wanted to ban] beachwear ostentatiously showing a religious affiliation while France and places of religious significance are the target of terror attacks [in order to avoid] trouble to public order”. More towns jumped on the bandwagon using this logic and some even cited hygiene as a reason. A tribunal in Nice later upheld the ban stating that it was “necessary, appropriate and proportionate [to prevent public disorder]”.

As reports began to surface that dozens of women were being fined and ordered to remove their clothing on beaches, arguments relating to sexism also began to arise.

The issue with the burkini ban is the fact that while certain towns in France are trying to protect their right to secularism, they are telling women what they can and cannot wear. The burkini is not the niqaab; it’s essentially no different to a wetsuit.

As shown in the image above and as voiced by the queen that is JK Rowling, it seems to be the case that whether a woman is fully covered or uncovered, she is always being in some way provocative. What is most concerning is that many of the men running France are 100% behind this ban, using arguments of national security (which are nonsensical – have you ever seen a burkini clad terrorist?) and women’s rights as justifications for their views. Unfortunately for them, while it’s nice that they are so concerned about women’s rights, they seem to be missing the fundamental point that telling a woman what she can and cannot do is the basis of misogyny.

Arguments relating to oppression have also been raised, with some stating that if countries such as Iran and Saudi Arabia can force a woman to cover up, France should be permitted to ask women to uncover. While I can appreciate that the strict regimes of these Middle Eastern countries do appear to be oppressive (and an unnecessary prohibition of choice for one sex is oppression in my view), France cannot compare itself to Saudi Arabia. If religion is law in parts of the Middle East, France’s separation of religion and state should not mean that religion (and the expression of that religion) is banned.

While leaders have stated that this ban would also extend to nuns, it is hard to imagine police officers ordering these women to remove their clothing. 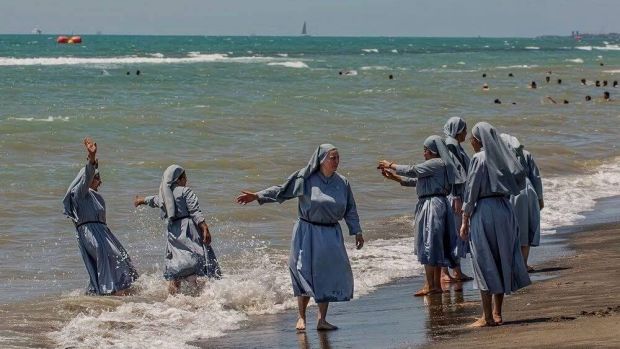 Putting arguments of sexism to one side, what this ban feels like to me is innuendo. While one thing (the burkini) has been banned, what they are actually banning is a number of Muslim women. They cannot have signs up saying ‘No Muslims please’, but this is essentially what they are insinuating. Whether you wear a burkini or not, the implication is that Muslims are not welcome in France; this will have the opposite of the intended effect when it comes to terror-related incidents. This ban has already given rise to a fresh wave of Islamophobia, as riots and attacks have been carried out against North African communities in Corsica.

While France’s highest administrative court has ruled the burkini ban as illegal, it may be that the damage has already been done. Western and progressive as we think we are, France has done nothing but perpetuate a lack of tolerance and sexist values with this ban.

What are your thoughts? Do you think that the burkini ban is necessary or discriminatory?

One thought on “Understanding the ‘Burkini Ban’”