Like most young women, Beyoncé is my guide through life. So when I was checking out the comments on our latest YouTube video and noticed a few ‘hate comments’, I thought I’d take a lesson from Queen Bey herself and make lemonade from my lemons. These comments were from your usual YouTube trolls, who were most likely incensed by the word ‘feminism’ being in the title of our video. The comments were –

“Everytime a feminist speaks … a girl gets raped.”

“Why don’t you focus on being home with and taking of your children instead of pretending to be men.”

These comments on an innocuous (and quite cringey) video about charity donations are clearly ridiculous, but do serve to highlight the fact that whenever women talk about women’s rights, rape comments may be just around the corner.

Back in 2013, feminist activist, Caroline Criado-Perez, started a campaign to have Jane Austen featured on the £10 note. This humble cause resulted in her being inundated with rape threats online, some of which landed the perpetrators in prison. So how did she deal with the trolls?

“I felt it was important to set an example, it was also a bit of bloody-mindedness — why on Earth would you give trolls what they want?”

Obviously, there is a clear difference between legitimate threats to your safety and people who are just trying to wind you up, but whichever it is, there has been an undeniable rise in the amount of online trolls targeting women.

Some of these trolls are identifying themselves as ‘meninists’ – but what does that actually mean?

Some sources say that ‘meninism’ is a satire of feminism, where men can come together and mock feminist ideology and call for equality for men. The issue is that while the definition of feminism is equality between the sexes, women have traditionally (and in some places, still are) been seen as the inferior sex. The other problem is that with satire, some will accept it as a universal truth.

Some of their comments are silly –

why cant she open the door for me? #MenimistTwitter

But some are just disturbing –

A recent example is probably the internet’s favourite ‘meninist’ moron, Ryan Williams, who recently announced his annoyance over the tampon tax debate and asked why women couldn’t simply hold their periods in until their reached the toilet. On the face of things, Ryan needs a serious anatomy lesson but a big part of me did wonder whether he actually believed half of the crap he was spouting. Was he simply after his 15 minutes of troll fame? And had we given him exactly what he wanted by causing such a fuss?

Following the backlash, his next move was to create a Go Fund Me page, in order to raise money for biology lessons: 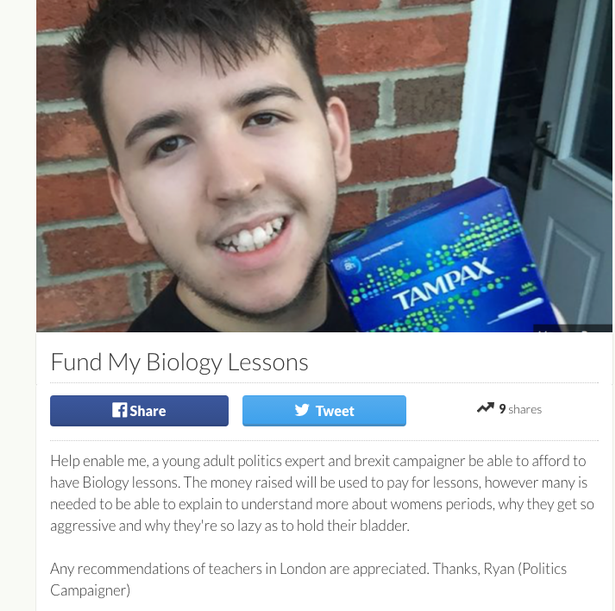 So, what is the best way to deal with the trolls in your life?

Whether it’s online or in real life, it seems that the best way to deal with trolls is to ignore them. You are never going to win an argument with a troll and you will never bring them around to your way of thinking. Some of them may not even believe what they are saying – they are simply looking for a reaction. If we do not react, the trolls will die.

Stay safe online and just remember, if you don’t like it, report it! We thought hard about how to combat our few YouTube trolls and while we decided not to respond, we did report the rape comment because there is just no place for that.

2 thoughts on “Dealing with ‘Meninist’ Trolls”