Since the start of lockdown, I’ve been having telephone counselling with a wonderful counsellor called Catherine. My previous experience of counselling, whilst positive, and addressing issues that needed to be addressed at the time, was with a male counsellor, and I knew I wasn’t being entirely honest with him. Not so much in what I was saying, but in how I was saying it – I was unconsciously presenting him with a gentler, censored version of my interpretation of events. I didn’t want him to think I was a silly, angry woman.

With Catherine, I swear like a trooper and I go off on rants. One of the big things we’re dealing with in my sessions is anger – how I often sublimate it, and push it down like magma, reshaping it into what I think is a more accessible form, forcing myself to find empathy or compassion for another when really the anger-magma is hardening within me, crystallising into resentment, lurking, ready to do damage later on.

As you can probably tell, I did not do GCSE Geography

I struggle with other people’s aggression, and how others might view my own assertiveness. People do not consider me an angry person. But over the past nine months, I’ve been feeling anger closer and closer to the surface: like the melting of an Ice Age, these buried remains will surely reemerge. And it’s terrified me.

When things went south at work, and circumstances felt so unbearable and unjust, I could feel a physical transformation sweeping through me. I was so quick to anger, but had to hide it. I was clenching my fists, gritting my teeth, giving myself tension headaches and chest pains from the stress of not releasing the anger. I had to take a week off work after paramedics told me what I feared was a heart attack was actually a prolonged panic attack, brought on by continuous low-level hyperventilation.

Since then, I have been quicker to anger. I have had the angriest row I’ve probably ever had – and it shifted something in that relationship. I have, with Catherine’s help, gone over painful events and relationships from the past, and excavated the anger lying dormant, crying angry tears, writing angry journal-letters to the instigators of my hurt. And something eased in me then too.

Artist’s impression of me at my laptop

When Catherine asked me why I hated getting angry, my revelations surprised me. I was scared. Scared of appearing hysterical, scared of not being taken seriously, scared of my own power and whether or not I could control it.

And then last week happened, and Dominic Cummings was all over the news. Regardless of whether you think his actions were justified and within guidelines or not, it is undeniable the nation is angry at the moment. I found myself the angriest I’d been in a long, long time.

When I spoke to Catherine about this on Monday, she asked me to explore why (other than the obvious) it had angered me so much. I realised that I’m not even that angry with how monumentally stupid his actions were, but with all the messaging that’s come after from the government. It has been so dismissive, so unfeeling, so ill-advised, and the tone of so many Tory tweets has been ‘calm down, dear’. What if we’re not ready to move on? What if we don’t want to drop it? What if it’s not the end of the story for us? We have a right to anger, and to see that through. I cannot sublimate it any more.

Definitely not the ‘end of story’

As we explored this further, I realised it had hit a nerve. When I have allowed myself to present anger to society in the past, it has so many times been dismissed. And it is something particularly dismissed when you are a woman. Standing tall at 5ft3, I can get put down as ‘ranty’, ‘shrill’, ‘a pocket rocket’ – more often than not, when I allow myself to show anger to male friends, family members or partners about a topic they might not feel equally angry, they essentially laugh at me. They patronise me: they think it’s cute, they tell me it’s just not that big of a deal, or that it’s not the truth of the matter. They use phrases, like Cummings did during his press conference in the Rose Garden, designed to dismiss your rage as unrighteous: ‘Well, what you’ve got to understand is…’, ‘The point is…’, ‘With all due respect…’. I HATE those phrases, I told Catherine. I DON’T have to understand, I DON’T need to be told what the point is, and I DON’T have to accept your ‘due respect’ as you simultaneously take it away. I am entitled to my anger.

But *disclaimer*, it’s #notallmen, and it is women too. Female friends have inadvertently shamed me for expressing rage as well, and I’ve definitely done it to them. We have taken onboard a societal message that tells us there is a problem with angry women. Who would want to marry an angry woman? The Medeas, the Beatrices, the Glenn Closes. We are not desirable if we’re angry, because we’re normally pointing out a really fucking uncomfortable truth. And there is, of course, the insidious, painful truth, the underlying and constant fear, that if we present anger, anger might then be re-enacted, bodily, on us.

And yet angry men are ten a penny – it’s just how they’re made, right? Testosterone, hunter-gatherer instincts, right? And women are the nurturers.  We must soften our rage and file down our sharp edges, lest we hurt someone with them. But fuck that. I’ve spent long enough trying my darnedest not to hurt people who have hurt me, and it is ultimately unsustainable.

Anger is an essential outlet when channelled healthily – Catherine suggested to me doing a frenzied dance when I get angry, so there’s a physical release. Writing helps my anger, whether it’s an expletive-dotted blog post or a spur-of-the-moment spoken word poetry, but sometimes there needs to be a physical acceptance and transformation of that anger too. (Driving fast with frantic Spanish rock blaring out is another favourite anger-allowing pastime of mine.) Find your angry channel and let yourself flow down it. 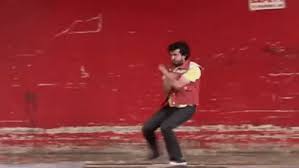 All these thoughts were swirling in my head this morning when I saw the news that Emily Maitlis had been reprimanded by the BBC and had not presented last night’s Newsnight. But my anger was piqued when I saw Conservative MP Daniel Kawczynski’s now much-retweeted tweet about Maitlis: 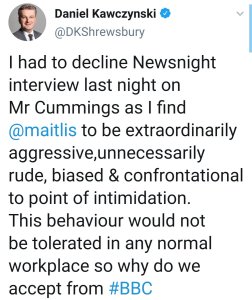 Following hot on the heels of Health Secretary Matt Hancock telling Shadow Cabinet Minister for Mental Health Rosena Allin-Khan to ‘watch her tone’, yet again those who have been elected to represent and work for a fairer, better society have gaslighted a woman for being angry. Women are not allowed to be ‘aggressive’ or ‘confrontational’ – and yet, I’ve switched off the TV more than once before watching Paxman, Marr, Dimbleby, or the entire House of Commons.

I’ve not even touched on the stereotype of the ‘angry black woman’ – that’s a far bigger blog post, and written about much more expertly by BME women who’ve experienced and explored that insidiously damaging narrative for themselves: Serena Williams, Patrisse Cullors, Tarana Burke, Brittney Cooper, Michelle Obama and Reni Eddo-Lodge, to name just a few. I’d exhort you to read and listen to these women.

So please, be fucking angry if you want to be. I’ve been politically angry for a long time, but I’m finally getting there with expressing my personal anger too. Because, ultimately, the personal is political, right? Too fucking right.