In one of my Year 8 classrooms, there are a few streaks of dark red paint stained into the floor tiles by one particularly vocal student’s chair. “Miss!” I’ve been alerted more than once, “Someone’s had their period on the floor!”

With around a thousand female pupils and a large percentage of pre-menopausal female staff, period shame doesn’t seem to be too much of an issue at our single-sex school. Younger girls come up to me without too much shyness to ask if they can go to the toilet to change their pad, or show me a note from their mum asking if they might be excused should they need to readjust; older girls go down to the office for pain relief and hot water bottles which flop around their waistbands like boneless baby joeys. They are vociferously defensive of their menstrual rights: a few Year 11s once told me it was “illegal” for me not to let one of their gang go to the toilet in the middle of our lesson as she was on her period, and that “she could die” if her menses weren’t allowed to flow out of her immediately into the toilet bowl and not just into her pad whilst she sat and worked on some similes. Whilst their menstrual knowledge may not be the soundest, I am at least confident that, in general, menstruation is not stopping my girls from accessing their education.

Here at ABGC HQ, we’ve previously looked at the devastating effect a lack of access to sanitary products and an outdated taboo can have on girls’ education abroad, but we hadn’t considered the impact this was having closer to home. It was reported last month that girls in Leeds were missing school during their period as they could not afford sanitary products. Students admitted to using socks and tissues to soak up blood at times when they did not have the money to access conventional sanpro, and it was revealed that many students rely on donations of sanpro from foodbanks and that many teachers regularly provide students with sanpro from their own supply. It is unlikely that this problem is one isolated to Leeds; as a teacher, feminist and distributor of sanpro, this news has made me more alert than ever that the young women who bustle past me in the corridor every day – or perhaps, more likely, those who don’t make an appearance every day – may be lacking the most basic hygienic provision. 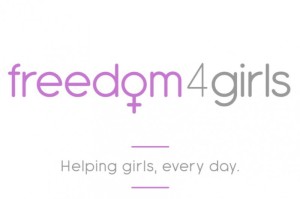 Following this shocking news, menstrual project Freedom4Girls – who raise money to buy sanitary packs for girls in Kenya who miss school for up to a week every month – began to include UK period poverty in its crowdfunding campaign. A change.org petition has also been launched to lobby the government to provide free sanitary products for girls who receive free school meals.

But provision is just one side of the bloody coin: as Chella Quint writes in her Guardian response to the Leeds scandal, “Buying tampons for people only lasts for a certain period. It doesn’t address the taboos or end poverty.” A teacher friend recently informed me that their school had installed vending machines providing free sanpro into every toilet block – a double win for this particular co-ed school whose pupils use unisex toilets, so that just as girls have access to products when they need them, the appearance and use of sanpro is normalised to all students going about their day-to-day business (if you’ll pardon the pun).

I fear, however, that this is the exception rather than the rule. There is still much work to do in educating girls and boys about the menstrual cycle, not only so young people know how to keep themselves clean and comfortable – or support others to become so – but also so that we can make some headway into eradicating the ongoing and nonsensical stigma of a healthy and natural anatomical process that affects half of the population. If we cannot teach children to feel no shame and make no apology for having or talking about a period in a mature and respectful manner in school, then can we really blame them if they grow up to be adults who have never learnt to do just that?

Flicking through a recent issue of a teachers’ magazine the other day, I excitedly sent Sanya a picture of one of the ads I came across for Betty For Schools, an organisation set up to encourage “open, respectful and honest talk about periods” and to provide schools with “interactive resources for period education”. Their end goal aligns with what we hold dear: “we want to help create a generation of girls and boys who are truly at ease talking about periods.” Not only did we love Betty’s message, we fangirled hard over the gender-neutral advertising, not pinkified or flowered, that featured images of both girls and boys (and not just that, but girls and boys representative of a multicultural Britain).

The advert that captured my attention and heart, pictured from an awkward angle on the train

If we as a society can provide schools with not just the right sanpro provision but the right resources and conversational frameworks for talking about menstruation, hopefully we can make this the last generation in which menstrual truancy and period taboo affects any of the bright, hopeful, brilliant young people that will grow up to shape our world and its future. Until then, I will keep using that dark red paint on my Year 8 classroom floor as a conversation starter about embracing your leakage.

One thought on “How many periods in a school day?”